An interview with Karin Rivollet, IIW representative to the UN in Geneva

International Inner Wheel (IIW) – a non-governmental organisation (NGO) – has been a member of the United Nations Economic and Social Council (ECOSOC) since 1988 with a status of Observer on the Roster with Consultative Status. IIW representatives in New York, Vienna and Geneva follow and assist in the working sessions of various commissions on topics such as: human rights; the rights of the child; the condition of women, the family and the elderly; and drugs.

Karin Rivollet, member of the IW Club Geneva has officially represented International Inner Wheel at the UN in Geneva for almost four years.

Karin, can you introduce yourself in a few words?

I have been a member of IW since 2004, I really appreciate the meetings I had in our club as well as in the other IW clubs. I grew up in an international environment, love traveling and social diversity.

Why did you decide to become the IW representative at the UN?

I've always been interested in social issues. That is why I was interested in this position as a representative of an observer NGO at the Council on the Rights of the Child at the UN in Geneva. It was a good thing that our representative at the time wished to be replaced.

The role of the representative at the UN is not very well known. Can you briefly describe it?

Frankly, when I started my job as the representative of the IIW at the UN, I didn't know exactly what it was about either! The Committee on the Rights of the Child (CRC) in Geneva is one of the UN's subsidiary bodies. It is not a political body like the Security Council or even the Human Rights Council. The members of the CRC are elected on the basis of their personal expertise, they do not represent a country.

Every 4 to 5 years, the Council reviews all countries that have signed its charter. The delegation of the reporting country submits a report on the living conditions of children and women in their country. The CRC members then discuss this report and suggest improvements. These suggestions are not binding as the CRC is not a court. At the next periodic review of the country concerned, the CRC checks whether these proposals have been implemented.

Are the topics covered in Vienna, New York and Geneva the same?

No, each UN headquarters has its own specific concerns. In Vienna, for example, my colleague from the IIW focuses on the condition of women and the ageing population. These discussions take place in a non-political forum. The UN deals with many social issues that are less known to the general public and that are discussed in countless chambers that one never gets to see in the media.

Do you have contacts with the other IIW representatives at the UN?

The IIW Vice President we report to, recently brought together IIW UN representatives for a discussion on Zoom that was taped for presentation at the IIW Convention in India on April 17th and 18th.

How do you react when you read some of the reports?

The delegation reports are always very interesting. Before attending the meetings, I collect as much information as possible about the country being reviewed. Are there, for example, problems with early marriage, female circumcision, illiteracy, a lack of care for girls or a lack of education in rural areas? This way I can understand which issues are sensitive and likely to be bypassed, and where the discourse is more political than realistic.

What can the presence of the IIW at the UN bring, considering that our status is that of an observer?

At the end of each of the three two-week meetings per year, I prepare a short report in English, which I send to our IIW Vice President. These reports are published on the International Inner Wheel website. Our participation is thus made public.

Do you think our presence is necessary? If so, for what reason/reasons?

The presence of NGO representatives in the UN conference rooms alone makes the delegations aware that they are being listened to. NGOs therefore carry a certain weight to bring issues to the fore and try to improve the well-being of women and children.

How can the situation in these countries be improved?

As the CRC is not a judge, I believe our role is to make issues public where they exist, in the hope that a better understanding of the issues to be solved will improve the search for solutions.

Have you seen an improvement in the situation of countries you have observed?

I have represented IIW at the CRC for 4 years and have yet to take part in a country review for a second time. It is therefore difficult for me to observe the evolution of conditions in these countries.

Did you have the opportunity to visit the countries you followed during the sessions?

The CRC reviews all the countries that have signed the Charter on the Rights of the Child, so of course I have visited some of them, mostly in Europe. Some of the sessions made me want to revisit more distant areas, when travel becomes possible again.

How has the pandemic affected UN meetings?

The last two meetings, after having been postponed at first, have now been canceled, which messes up the Council's work schedule. Other UN consultations continue, but the UN administration wants as few people as possible on its premises, so our NGO accreditation cards have been suspended.

I hope the reviews will continue, but I fear that some governments are slacking off in their efforts.

Is it conceivable that, as a result of the reports by the women's representative at the UN, the IIW could propose a major international social project?

It's an interesting proposition. International Inner Wheel is 108,000 "women" strong, so we represent a group that can have real weight. During the visit of our President Bina Vyas to Geneva in January 2020, we asked for a meeting with the person responsible for the links between the UN and the NGOs, with the aim of considering a concerted action.

And finally, a more personal question: What will your first travel destination be when we can travel freely again?

India, its colours, tastes and diversity make me dream ... 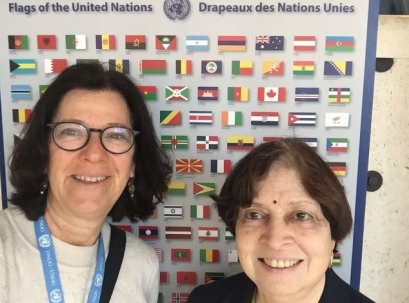 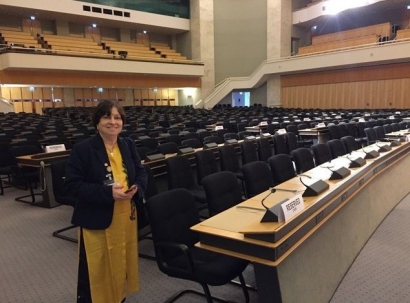 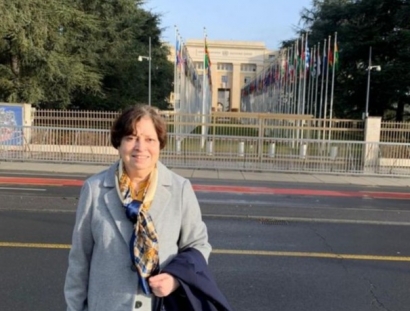